One thing you need to be prepared when coming to Zurich is the cost of hotels and food. You easily have to pay 20€ for a lunch, and 50€ or more for even a very simple dinner. I visited 2 restaurants during my stay in Zurich:

For Lunch I was feeling like having the traditional Flamkuchen so I chose the first place on my walk around the city offering those: The Raclette Factory. The place was casual but centrally located on the opposite side of the river on the small alleyways.  The service was very attentive and friendly, and food came really fast, which might have also been because I was there right when it opened and there were no other people waiting for food 😉 Also the Flamkuchen (the swiss version of a pizza) was exactly as it should be: thin & crispy with plenty of sour cream, cheese, onion and bacon! 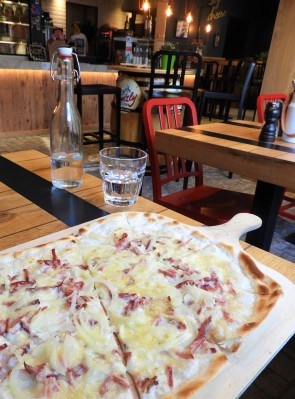 TAO is located in the heart of the old town and is kind of Swiss-Asian fusion Cuisine with prices of main courses starting around 40€. I indulged myself in a seafood & fish tagliatelle which was simply delicious. I wish I had a picture but my phone was running out of battery and the flash was no longer working…  The dish had a scallop, tiger prawn, tuna, salmon and some tasty white fish alongside yummy tagliatelle. And of course I had some local wines to go with it which was perfect.  I skipped the cocktails since there are very few cocktails for which I’m prepared to pay 20€+ for.

TAO also has a popular bar / lounge downstairs which was packed by the time we left around 11pm.

Motel One for the night

I’m not sure this hotel has the right name as the word “motel” to me sounds like an ugly & cheap roadside hotel and this definitely wasn’t that. For Zurich, the prices were moderate (around 150€ /night/double) and there really isn’t anything you could complain about the hotel. The lobby and bar downstairs are amazing, the location is really good just 0.5km from old town and the rooms were good too. Definitely would recommend staying there.

It's time for good bye, dear @levilapland. While this time it was much warmer than normally (+5 - -10c, I really enjoyed my days #xcskiing and on the #slopes. Hope to be back soon again 😍
It's so easy to relax in these views. And this relaxation was definitely needed😊
Feeling happy yet exhausted after first full day of all kinds of #skiing. It's also pretty amazing how year after year I get excited about the stunning #nature in #finnishlapland 😍

Came here in look for some great egg dishes and the variety they offered was great! Also very practical for an early bird like myself that they opened already at 9am on a Sunday 😁 While I liked my baked egg dish, next time would likely opt for something with avocado and poached eggs, since no matter how many other dishes I try I always end up thinking best breakfast dishes just gotta have those ingredients 😅 Oh, and this place also really conveniently located next to St Paul's cathedral and The Millennium bridge.
This place has it all: the best view in London and great Eggs Benedict. I normally go for their special version with duck, but today I couldn't resist the more traditional salmon royal with a side of avocado 😋😍 I try to make it to this place on all my London trips. If you want to do the same, remember to book your table well in advance!
I just love the small sharing plates here! The Japanese pancake is my absolute favourite. This time didn't get a table with a view, but with this food, who cares!