According to most travel guides, the best place for snorkling in Zanzibar is Mnemba island some 5km from the northeast coast of Zanzibar. The closest village there is Matemwe where you can hire small boats with captains to be taken to the reefs near the island (50USD per small boat). Of course you can also stay at the small island of Mnemba, but that means you have to be ready to pay the 1600USD/per ngiht / per person fee the hotel there charges…

Our 90km trip from Paje to Matemwe took some 1.5 hours on roads that were on surprisingly good condition and the biggest challenge is tackling the “toll posts” set by the police who pretend to be monitoring the traffic but actually are collecting bribes.. In our case they said there was something wrong in the way we used our lights when passing their post which meant we had to after long negotiations give 5USD for them to “buy some cokes”…

Matemwe itself is a small fishing village on a beautiful sandy beach with very few tourists. 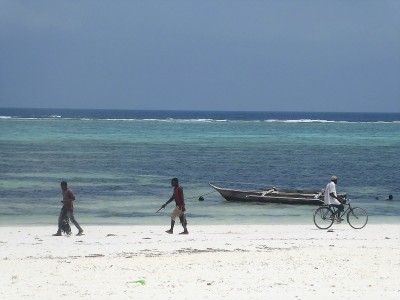 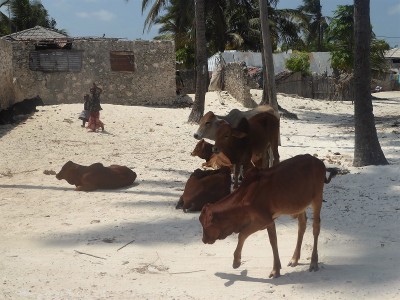 The actual snorkelling trip with our captain and his assistant started right after we arrived in Matemwe. The trip to the snorkelling spot was fast on our small boat but maybe the light hearted might have been a bit scared going through the big waves on our little boat. (pictures taken closer to shore with less waves)

As the place is known to have the best snorkling on the island, we were definitely the only ones there when we arrived: in addition to smaller boats from Matemwe there were a lot of bigger boats from Nungwi as well.

While we did have some fun snorkelling, there was no where as near as many and colourful corals here as they were on our “home reef”.

If you are feeling hungry after the trip, I highly recommend eating at the Keys Bungalows restaurant right on the beach which serves some excellent fish and calamari.

One thought on “Zanzibar: The authentic village of Matemwe & Snorkeling at Mnemba island”